One of the rewarding things in photography is the people we meet while out in the world taking pictures. I mean not only the people we actually take pictures of, but also the ones we meet while taking pictures. Chance plays a good part in that, as it does when guiding us into interesting scenes at the turn of a corner. If chance doesn’t help you to get a good picture, who knows, it might help you to get a date. Or perhaps, to meet a homeless man who will grab you by the hand and lead you inside a used bookstore to show you a picture – stories we collect through photography.

I lived in San Francisco’s Lower Haight for about 3 years in the early 90’s. A lot of homeless people lived in the streets and parks around the Haight-Ashbury area, famously known as the epicenter of the Summer of Love in 1967. In the sixties its 19th century multi story houses were home to thousands of hippies, including artists like Janis Joplin and the members of Grateful Dead and Jefferson Airplane. Many of the homeless I saw asking for change on the sidewalks were old flower children from that time, often alcoholics and/or drug addicts.

One of them, who I saw almost every day, would sometimes be in an awful shape, too drunk and weak to even mumble “spare some change”. He was well and sober, though, at the time I gave him a dollar, and because he had noticed I was a photographer, took me inside the bookstore to show me a picture of him that appeared in a book of photos. From one of the shelves he grabbed an edition of A Day in the Life of California, scrolled through the pages and – there he was, in a small portrait, looking good and thoughtful. I smiled and congratulated him for being immortalized in such a noble expression. He smiled back, very proud.

I loved to wander around the Haight, taking pictures of street artists and craftsmen, watching the hipsters pass by, chatting with the deadheads and homeless that took over the sidewalks. I’d hang out with them, listen to their stories and dream that sometime I would hop in one of those hippie buses parked by the Panhandle and hit the road across America. I planned to go on a cross country trip at some point, but at that time I was really busy taking Photography classes at the City College of San Francisco and working almost fulltime as a delivery man for a North Beach restaurant. The place’s specialty was Buffalo chicken wings, and once in a while I’d take a package of dozen wings to some of the Haight’s homeless. They’d be so exhilarated it felt like I was offering them a feast. After a while, I started to be referred as the chicken-wing man.

One day when I was walking with my camera, I was stopped by the same man from the Day in the Life book, this time accompanied by a woman in sunglasses. He didn’t look good. He seemed pretty beat up, actually, with a disturbing expression, saddened eyes and a wavering speech. But hey, at least he had a woman in his arms – even if she was in an equally poor condition that not even her sunglasses could hide.

He asked me for some change, but this time I said I had none. “Then take my picture”, he said. Just then I noticed he was holding a broken tambourine. As far as I can remember, I didn’t think of possible metaphors, just that there was something touching about that damaged object and the dignified way he was carrying it. I asked him to raise the instrument. For some reason I decided not to include the woman in the composition (because of the sunglasses, I think) and made only one shot. He thanked me and walked away with his partner, both stumbling and propping each other up. I went on my way, thinking not much of that encounter – another day in the life of taking pictures.

I didn’t expect anything from it, but after a look at the contact sheet I decided to make a print. In the end – who would have guessed – I included the image in a presentation at one of my classes. Every week we had to present a set of 5 to 10 pictures. All of us students would position our photos on the walls across the classroom and we’d follow the teacher while he circulated, analyzing each group of images. On my turn, my classmates had barely looked at my work when a girl goggled at the picture of the old hippie and shouted with disbelief: “My uncle!” She told us he had been living for many years on the street and had a history of drugs and alcohol addiction. He didn’t keep in touch with his family, but would make sporadic visits, usually on dates like Christmas or Thanksgiving. Or he would just appear out of nowhere in a surprise visit. We were all astonished by the coincidence. I mentioned that he was pictured in the book A Day in the Life of California. (A note: I eventually purchased the book and still have it. I looked for the picture in search of the photographer’s name. The photo is printed on page 121 and the credit goes to David Barry. However, checking the photographers’ biographies at the end of the book, I didn’t find any David Barry.) Unfortunately, I no longer remember either my classmate’s name or her uncle’s.

I gave the picture to her. At the first chance I had, I also gave a copy to her uncle. Even though his appearance in my picture wasn’t nearly as good as in the Day in the Life, he liked it regardless. Obviously, I told him about the coincidence that my classmate from City College was his niece. Since then, every time I’d bump into him, he would not only ask for some change, but also ask about her. “If you see her, tell her I love her very much.”

3 thoughts on “Days of Our Lives” 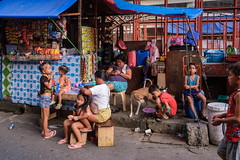 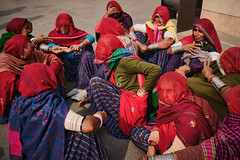 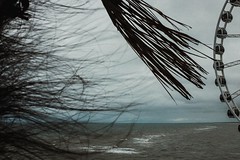 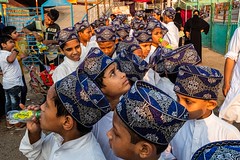